Rex Ryan loves Ray Rice, Could the Bills be the team to give him a second chance? 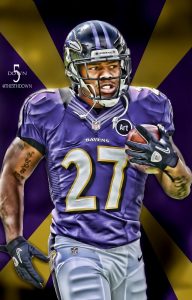 How many running backs do the Buffalo Bills need?  While they have a ton on their roster right now, Don Banks of SI.com polled twelve league sources and came away thinking the Bills and Rex Ryan could be a possible fit.

“I think I’m in the minority on this, but I think he plays this year,” Banks’ source said. “But it’ll have to be for a really strong front office organization. Seattle, Green Bay, Dallas, situations like that. I’m a little bit surprised that it has taken this long for someone to sign him. Buffalo could be another team to watch with Rice. They don’t have a need at running back right now, but I’m told Rex Ryan thinks the world of him from their time together in Baltimore [in 2008]. He loves him. He doesn’t like him. He loves him.”

I personally would love to have Ray Rice on the Bills. I am a huge Bills fan, and feel he is better than Bryce Brown and Anthony Dixon.  He would be a good option for the Bills. Remember Fred Jackson is 34 years old as well.

The Bills are not interested in free agent RB Ray Rice, according to ESPN’s Mike Rodak.