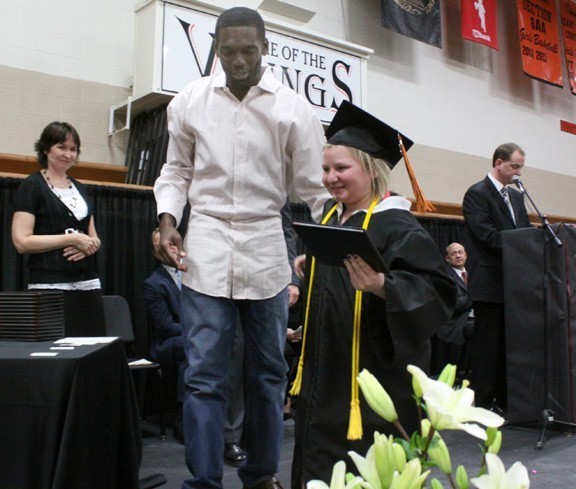 Randy Moss the former Viking wide out sheds his bad boy label to do something amazing.

Randy Moss will be known by many as a bad boy, who fell in the draft because of bad decisions, but the former Vikings wide out has a heart, and last night he showed his emotions.

A story published by the Associated Press during the 2003 Vikings training camp in Mankato, Minn. described how 7-year-old Kassi Spier went to lunch with No. 84 Moss nearly every day, with “her tiny hand tucked inside his.” But it was 3 years earlier, in September 2000, that their bond was strengthened by a visit to Mayo Clinic in Rochester. Spier, then a 4-year-old, had been diagnosed with leukemia. Moss didn’t want to leave her side.

The leukemia diagnosis was the first of many life obstacles for little Kassi. In 2004, her dad died in a car accident. In 2013, she was back in the hospital, diagnosed with a brain tumor, according to Inforum.

Moss surprised Kassi for her graduation and that is pretty amazing.

“She’s had many struggles in her life, and he’s been there for her,” Pelican Rapids public schools superintendent Deb Wanek told the newspaper. “He told her he’d be at her high school graduation.”

People change folks, and it seems like Randy Moss did have a heart. He will still go down as one of the best to ever play the game.