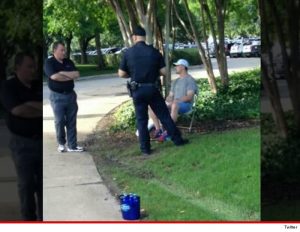 Cleveland Browns quarterback Johnny Manziel allegedly got into a fight with a buddy of his after a golf tournament Saturday and according to TMZ Sports.

Johnny and a group of friends were leaving the Byron Nelson Golf Classic in Irving, Texas, near Dallas, when he got into an argument with a guy in his group.  The eyewitness tells TMZ Sports, the guys were yelling at each other when Johnny threw a water bottle “really hard” at the guy, but missed.

The eyewitness tells us, Johnny’s friend sarcastically screamed, “Nice throw, Johnny,” which apparently enraged the Cleveland Browns QB.  The eyewitness says Johnny charged his friend, but was stopped by someone in his group.

Police and Security were called to the scene.  No one was charged according to report, but this is not the publicity Johnny Manziel or the Browns need.