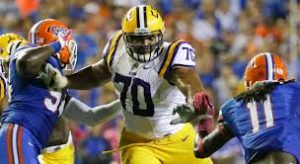 St. Louis Rams wanted to draft La’el Collins in the seventh round, I think they should have taken him.

La’el Collins the former LSU offensive tackle was almost drafted in the 7th round according to his agent. The team might have been the St. Louis Rams, because in the piece written with MMQB, the agent states the team drafted four offensive lineman, and only the Rams did that.

“This is on me,” one person in the hotel room told Klemko. “I own this. I had nothing to do with this, but it’s affecting y’all. I just feel bad that we’re not going to be able to live our dream at the draft.”

“There was a team that had drafted four offensive linemen, and they said, ‘We’re taking him,'” Collins’ agent Rick Smith said. “And I texted back, ‘You’re going to embarrass yourself. You’re going to waste this pick.'”