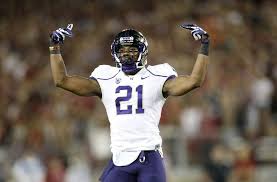 The 2015 NFL Draft was exceptionally good to the Kansas City Chiefs. The Chiefs has 10 picks. A nice haul but most of the extras were due to compensatory picks. The NFL allows these gems for losing players via free agency. Four players were lost after the teams 2013 season.

The first round was very interesting much because some prospects slipped in the draft for various reasons. When the Chiefs were on the clock in the first round it was difficult to guess where they might go.  They selected Marcus Peters, DB from Washington. Peters had 99 tackles, 9 interceptions and a touchdown in his career at The University of Washington. This was a great pick! The Chiefs have added nastiness to the defense. Peters plays with a great physical style. He can run and play with the best of them.  Peters is definitely going to help the Chiefs. He does have some off the field concerns; however, the team investigated and spoke to several people close to him. The team feels as if it will not be a further concern. Jon Gruden who was covering the draft for ESPN; added,  “The best corner in the draft, and it isn’t even close. He’s going to the best locker room he can go to.” Coach Reid is very close to his players and I know this will help Peters. Again, a great pick.

The second round began and the team had pick number #49. They selected an offensive tackle Mitch Morse, from the University of Missouri. Morse will provide depth and competition at camp this summer against veteran, Eric Kush. Morse is a 6’5 tackle and has 32/1/2 inch arms. He weighs 305 and ran a 5.14 40 at the NFL Combine. This was somewhat a surprise for a second round pick; but the team felt he was probably rated higher than what some of the scouting reports felt he was a 3 or 4th round pick

The third round the Chiefs has two picks. The 76th pick is Chris Conley, wide receiver from Georgia. He is a 6’2 guy that is very fast running a 4.35 at the NFL Combine. He has some work to do refining routes; but is intelligent and an extremely hard worker He has a knack for making difficult catches.

The club selected Steven Nelson, DB Oregon State. Nelson is 5’10 corner who is a small but capable corner. These move again adds depth to the position. Nelson excels at playing press coverage. He is a nice pick for the Chiefs. This will provide depth and strength at the position.

ILB Ramik Wilson, Georgia This addition adds help to the linebacker core. Last year saw injuries to Derrick Johnson. Wilson is athletic He was a three-year starter in the SEC and led the league in tackles in 2013. He will likely compete for a starters spot.

In the fifth round, the Chiefs selected two players. The first was another inside linebacker; D.J. Alexander an inside linebacker from Oregon State. Has speed for a linebacker running a 40-yard dash at 4.5 seconds. The second addition, at Tight End is James O’Shaughnessy, Illinois State.  The team likely sees him as developmental prospect. He will get a good chance to learn under Travis Kielce and Demetrius Harris.

In the sixth round, the team selected Defensive Lineman, Rakeem Nunez-Roches, Southern Miss. This move gives the team some depth at the defensive line. He starts fast and works hard.

The last pick in the seventh round was Da’Ron Brown, WR Northern Illinois. He’ 6’0 and has large hands at 10 ¼.He’s more of a possession receiver much as Jason Avant; however, he’s a good pick to improve the wide receiver corp.

The team dealt well during the draft adding help to trouble spots from last season. These selections will add depth and competition. After the draft the Chiefs signed, several undrafted free agents. You can see the list of those signed here at Draft Diamonds. The team will hold a minicamp starting 5/16.