Every team but the Rams will hold OTA’s this week; Full schedule 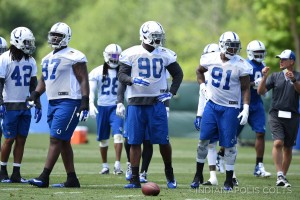 The NFL is getting closer, and this week every team but one (The St. Louis Rams) will participate in OTA’s according to Pro Football Talk. OTAs are non-padded, non-hitting practices in which coaches can instruct players. Players can wear helmets, and full team drills are allowed, per the CBA between NFL teams and players.

Here are the days in which teams will hold OTAs this week: