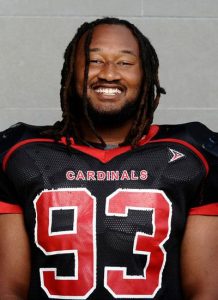 Ibraheem Khadar a defensive tackle at Wesleyan University slammed his car head-on into another vehicle, injuring two people, during a suicide attempt in Middletown, Connecticut this morning.

An officer who spotted Ibraheem Khadar, 23, speeding on William Street around 12:45 a.m. yelled to him, but Khadar passed the patrol car and hit a sedan, head-on, according to NBC Connecticut.

Khadar had 17 tackles on the defensive line which helped the 2014 Wesleyan squad lead the NCAA Division III in fewest yards allowed, allowing its opponents just 220.8 yards a game during a 7-1 season.  The 124 yards a game the Cardinals permitted through the air was tops in the NESCAC while the 96.8 rushing yards yielded per outing was second in the conference.

Khadar was alone in his car and initially refused officer’s orders to show his hands, police said. But then, he threw the door opened, got out of the car, walked toward the officer and yelled to authorities to shoot him, police said.

Khadar claims he was upset over an argument with his girlfriend.