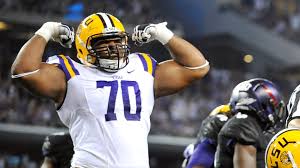 After undrafted free agent La’El Collins met with the Dallas Cowboys on Wednesday, the offensive lineman has signed with America’s Team, according to ESPN.

Owner/GM Jerry Jones hosted Collins at his ranch in Dallas last night and brought along quarterback Tony Romo and the entire offensive line to make a pitch on why he should sign with the team. Apparently, this was enough to land the once projected first-rounder.