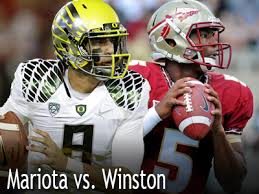 I am going to shed a little light onto the NFL Draft with some information that I received from a couple very prominent people in the industry.  Over the past 24 hours we have learned that both the San Diego Chargers and the Chicago Bears are working out the draft’s top two prospects in Jameis Winston and Marcus Mariota.  Now while many draft fans would sit there and say big deal, this is truly a big deal.

Both the Bears and the Chargers are showing their hand without really discussing it.  Let me explain.

Today I spoke to an agent that is very prominent in the industry, and I asked him why the player rep for both Jameis Winston and Marcus Mariota would allow their client to work out for a team that did not have the option of selecting them unless they traded up, and his response was simple.

“I personally would not let my player(s), work out for any team that does not have a legitimate shot at landing him.  Which makes me think that the Tennessee Titans are in discussions with both the Chargers and the Bears for the number 2 pick in the draft.”

I asked him then why would he say that, and his response was this:

“If I had a player such as Mariota or Jameis, I would not allow them to work out for the Bears who sit at seven, unless one of the teams in the top 2 were telling me that they could possibly trade out of the spot with that team.”

So I asked would they do that:

“Yes, they would especially if they had already discussed trades in the past, because their trade relies on my player wanting to go there.”

So it sounds like the Titans must be talking with the teams listed above about a possible trade, which means the Titans are not sold on either Mariota or Winston.

I then spoke to an NFL Scout about the situation, and he broke it down even farther saying this:

“Look at the teams that are getting access to working out both Jameis and Marcus, they have a veteran quarterback (minus the Jets).  Which makes you have to imagine the Titans want either Jay Cutler or Philip Rivers. Both make sense, Cutler played college ball at Vandy down the road, and Whiz had Rivers in SD in 2013.  Both are veterans with knowledge of the game.  Guys that can come in right now and win. Personally, I think the teams allowed the Jets to work out both clients is because the agents themselves might feel they are the only other team willing to draft a quarterback in the top 10.  So to answer that question, that is what I think, basically a safety shield if the prospect falls.”

I then asked the question we all want to know, Will Jameis or Marcus Mariota fall to 6?

“His response was I doubt they fall past 2.”