Rams will pick up the option of defensive tackle Michael Brockers 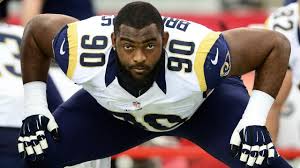 The St. Louis Rams are expected to exercise defensive tackle Michael Brockers’ fifth-year option, according to Jim Thomas of the St. Louis Post-Dispatch.

Brockers was drafted No. 14 overall in 2012 — and would have gone off the board at No. 6 had the Rams not traded down.

The former LSU star will earn over $5 million in 2016 after signing a four-year, $9.52 million contract as a rookie.