From Pro Day to the Draft: The “Uncertain” Waiting Game by former Giants DB John Stevenson 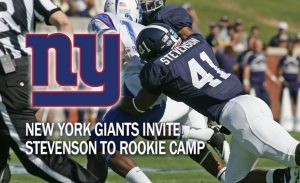 For some players the time from their respective pro days to the April 30 NFL Draft is literally a countdown to payday. These heralded top picks have been the poster boys for their respective universities for years and various teams around the league in need of a boost in talent are eagerly awaiting their services. These surefire first round picks can most assuredly say they “made it” but the vast majority of players will be eagerly awaiting a phone call that may or may not come.

Having personally been in this predicament, I can attest to being a small school player with little buzz before the draft and the uncertainty of me furthering my career. It can be quite a struggle to maintain the same intensity in training as you had prior to pro day. Most players set haughty goals for themselves to reach in the 40 yard dash,225 rep test, vertical and broad jumps, etc at their respective pro days. Whether they were reached or not the question still looms: Was it enough? The question only time can tell. For the ensuing weeks after hitting the pro day circuits around the country NFL personnel directors, scouts, general managers and coaches all sit in meeting rooms for hours on discussing players from SEC players of the year to Division III standouts and giving them grades based on all the information gathered about them. It’s every scout’s dream to unearth a hidden small school gem who comes in and makes a difference on the team. This garners the scout recognition which in turn leads to promotion to a more prestigious position.

After the final name of “Mr.Irrelevant” has been called on May 2,the league goes into a frenzy with teams getting on the phone and trying to secure the services of Priority Free Agents(PFA). These players probably had draftable grades on many teams boards but for some reason another weren’t selected. They usually receive signing bonuses ranging anywhere from $1,000 to upwards of $20,000 in rare instances. Other players are just guaranteed a contract with no bonus. Then there are the try out players. These players aren’t guaranteed anything but a flight, rooming and opportunity to participate in teams respective rookie mini camps usually held the weekends of the two weeks following the draft. But for some players that’s all they need flashing the abilities that garnered them notice in the first place by these teams. Some players never get the call or may get a call right before training camp starts in August.

The life of undrafted player is very unpredictable and nothing is certain no matter what you’ve heard from teams. My advice to all is to STAY IN SHAPE(that’s the quickest way to lose your job playing professional football and a lack of it shows a lack of professionalism on your part), stay positive and optimistic about your chances and stay prayed up. I personally am a believer in Jesus Christ and believe that great things are possible through faith in him. Trust the work you put in for however many years you’ve been playing, your coaching and abilities. At the end of the day if you emptied the tank and gave it all you had, that alone makes you a winner and you can hold your head high! Godspeed on your respective journeys!