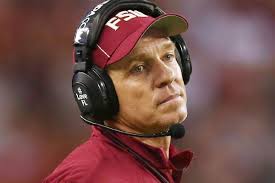 Yesterday, Jimbo Fisher the Florida State Seminoles head coach was on Pro Football Talk Live with Mike Florio and he talked about one day leaving for the NFL, but said right now that is not his motive.  He likes doing what he is doing, but he did have interest from at least one team this year, according to the conversation.

“I never say never,” Fisher said.  “I’m not one of those guys that that’s my end-all ambition.  But in this business you never say never.  I’ve had some opportunities to go up in the NFL and I’ve chosen not to do it, as coordinators and coaches — not as a head coach, I’ve had some people inquire.  But it’s not a driving force to me to do that, not saying I wouldn’t ever do it, because you’ll never know in this business.  But I love being a college football coach, I love living in the south, I love being able to get three or four first-round draft picks in a class instead of only picking one.”

So has he been ever approached about being an NFL head coach?

“I’ve had people inquire that if I’d be interested, through agents and stuff like that,” Fisher said.  “And it’s just not something that I’ve jumped on right away.”

I wonder what team it could have been?  These teams all needed a coach this year: Bills, Jets, Raiders, Broncos, 49ers, Falcons, and Bears.