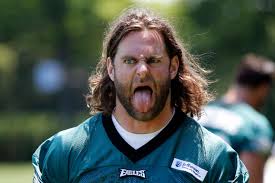 Evan Mathis of Philly says he is looking for dinosaurs in Antarctica.

Evan Mathis does not sound happy in Philadelphia.  A matter of fact, the guard is not in attendance today for the Eagles off-season workouts.

According to Jeff McLane of the Philadelphia Inquirer  Mathis will not be joining his teammates as the conditioning portion of the off-season schedule gets underway on Monday.

Instead, Mathis says he is searching for frozen dinosaurs.

“I’m in Antarctica looking for frozen dinosaurs to extract their DNA and splice them with my chihuahuasaur,” Mathis said.

This is the second year in a row the Eagles have been rumored to attempt a trade for Mathis.  Well there are rumors that the former All-Pro guard could be released if not traded this year, so maybe that is what he is shooting for?