Draft prospect La’el Collins will no longer attend the Draft; Will aid police in homicide investigation 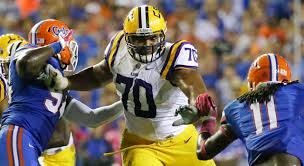 According to ESPN’s Adam Schefter, La’el Collins the former LSU Tigers offensive lineman and potential first round pick, will not attend the NFL Draft in Chicago to aid the police in a homicide case to clear his name.

Adam Schefter    @AdamSchefter
LSU’s La’el Collins voluntarily pulling himself out of CHIC to return to La. to meet with police in effort to clear his name, per sources.

Adam Schefter    @AdamSchefter
La’el Collins one of 27 prospects scheduled to attend draft; he decided more important to try to prove his innocence than walk across stage.

La’el Collins’ lawyer, Jim Boren, told ESPN that he has “tried to rule [Collins] out as a suspect” and has hired a private investigative firm to aid in the efforts of establishing where he was when the crime occurred, according to Pro Football Talk’s Mike Florio.

According to ESPN: “We have identified where La’el was the day the lady was murdered to establish he was nowhere around. We have offered to give names, witnesses who can vouch for his whereabouts that day until after the woman’s body was discovered. We believe that when [police] have verified that information, that they will rule him out as a suspect in the homicide, just as I believe he should be.”