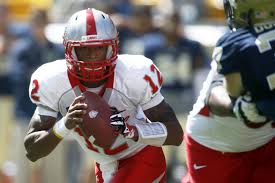 My name is Clayton Mitchem

I played 2 years at North Eastern Oklahoma A&M Jr. College then went to the University of New Mexico.

I chose the school that I had a good opportunity to play my first year.

I don’t have too many role models but if I had to choose one it would be Aaron Rodgers. I think -I kind of have the similar background story; not being highly recruited out of high school and having to go the juco route made me really relate to him. Just watching/hearing the way he dealt with his situation made me think that there was hope no matter what the circumstances are.

No, no scouts have met with me

I played football/basketball all through middle school.

I only played Quarterback my whole life

I have always been a competitor my whole life. I love to compete against the best at my position, to me the better my competitor is the better my game will be. Watching film and examining your opponent is something that I enjoy doing, getting a edge on my opponent for the week is something that I take pride in. My worst fear Is going into a game being unprepared. Im a dual-threat, I can keep plays alive with my feet but I don’t look to run when I scrabble out the pocket. Being clutch in every situation Is important and I feel I am clutch in all situations that I  encounter.

When watching film is something I take pride in like I said. I have learned over the years not to look for a defense tendencies when breaking down film. Tendencies can be misleading based off the number of defenders. When I play I stay true to my reads. I watch how deep the safeties are and often times the CB will give you a solid look on what the coverage maybe. Certain teams do certain movements to disguise a blitz. Knowing where the blitz is coming from is crucial, you have to be able to slide your line into the blitz.

My toughest opponent I played against was Aaron Donald for Pitt University at the time. It seemed like every play he was in the backfield hitting me or in my face even when I didn’t have the ball. In my mind, I’m like ‘wow this guy is everywhere”. When we looked at the film the next day he was everywhere.

If I had to compare myself to someone in the NFL it would be my man Aaron Rodgers or a Russell Wilson. How they just play the game so well and look so smooth while doing it. They both can run the ball well but they make the majority of the plays inside the pocket; the running ability is just extra.

I was not a standout player nor a flashy one often times that got me overlooked I felt. But every time I would go in I would get the job done no matter what. Just being overlooked made me put push myself harder and I fed off the negativity that people gave me. Saying things like “I won’t make it at the next level”, “your arm isn’t strong enough”, etc. I just sit back and smile the whole time because I seen it before it even happened.  I know myself and I know what I’m capable of. 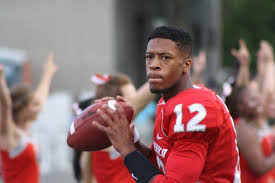 My pre-game ritual is real simple. I put my headphones on and vibe out and think about what I need to accomplish in order to get this win.

My biggest strength is to extend play with my feet by getting outside the pocket to throw the ball when I have to.

The biggest weakness I have is size. Gaining weight is the hardest thing for me. But I like the challenge because when I gain 1lb I know I worked hard for it.

I’m not going to sell you a dream but if you want a guy that is going to compete a 110%, a guy that takes coaching extremely well and someone that looks for every flaw in his game to improve that flaw so it won’t be one then I’m your guy.

I would like to have dinner with one of my dead friends, named Charlie, my dead sister named Desiree, and Nipsey Hussle.