Could the Philadelphia Eagles use Fletcher Cox as trade bait to move up? 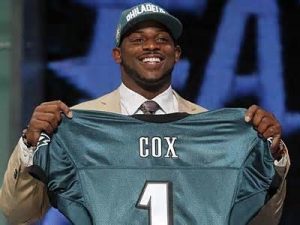 The Philadelphia Eagles have been putting together some interesting moves, and let’s face it under Chip Kelly as the new GM, no one is safe.  Ask LeSean McCoy….

Anyway, according to NJ.com, Fletcher Cox the teams amazing defensive lineman could be part of a trade package for the team to move up and get their guy….Mariota.

If the Eagles are going to move up from No. 20 to the top-two, they’ll likely have to surrender both picks and talented players. Cox, establishing himself as one of the game’s best interior linemen, certainly fits the bill. He’s also entering the final year of his contract and is playing the 3-4 end spot when his natural position is a 4-3 tackle.

This is from NJ.com:

As of right now there is no indication the Eagles would move Cox, other than Kelly’s declaration that anyone could go.

With the draft drawing closer, however, Cox remains one of the Eagles’ top trade pieces should they decide to make him available.