Adrian Peterson to the Dallas Cowboys will NOT happen; Could Cardinals land him? 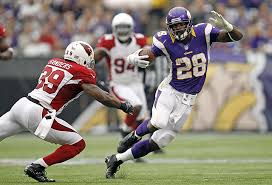 Ian Rapoport of NFL Media is reporting that the Dallas Cowboys are officially out of the running for Mineesota Vikings running back Adrian Peterson.  The 30-year-old running back will play for the Vikings or no one, or at least that is the word coming from Minnesota, per Rapoport.

But he noted that if one team could tempt Rick Spielman, it would be the Cardinals. The Bucs and Jaguars may be on the periphery though are not viewed as serious contenders.

A deal for Peterson would likely happen on Friday or not at all. Any return on the All-Pro would expected to yield a second-round pick and if the Cardinals do not find a running back they’re in love with on Thursday night, Peterson could be the guy in Round 2.