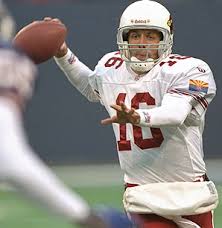 Yesterday, many people were shocked when Chris Borland the San Francisco 49ers second year linebacker hung up his cleats and decided to retire from the game.  This was shocking because many expected the shorter linebacker to fill the void of Patrick Willis who retired at the age of 27 a week before.  Well one person that knows quite a bit about retiring early, made a very good point in this interview.  Jake Plummer sat down with Kent Somers of the Arizona Republic and told him why he retired, and it made a ton of sense.

“My heart wasn’t in it, and you can’t play this game without 100 percent heart and soul into it,” Plummer told Kent Somers of the Arizona Republic. “If you try, you are going to get hurt and you’re also cheating the game, your teammates. And that’s the beauty of the football, it’s a team game.

“People ask me all the time if I miss it and I say, ‘You’re damn right I miss it. I’ll miss playing it until the day I die.’

“But, God, I wouldn’t go back to playing with what my life holds now, my family, my kids.”