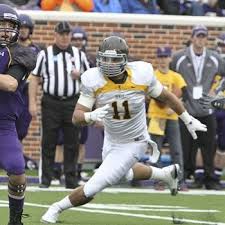 I choose Rowan because of the rich tradition of winning and it suited my playing style as a player.  I loved the defensive coaching staff the minute I visited here and the whole scheme was the right choice for me.

My role model has to be my mother.  My mother is deaf and was one of the top volleyball players in the New York City area back in the day.  She even got an offer to go try out for the Special Olympics.  She has shown me that there are no excuses on why you can’t be the best in anything you do.  My mother had the chance to make a lot of excuses in her life because of her disability, but she made the most of it.  She has taught me to not find an excuse but to find a way.  I will always have this approach in everything I do and it has helped me in my life not only athletically but academically as well.  That is why I will always look up to my mom as my role model.

I have not met with any, but a couple of NFC East teams are asking my coach if I am able to stand up and be versatile enough to play both MLB and OLB.

Yes, I have played basketball, baseball and track and field.

I have played every position on the offensive line and tight end.

I am very versatile in what I can do.  I can rush the passer and drop in coverage whenever I am asked too.  Whether it is from defensive end or any of the linebacker positions.  Also, another thing that separates me from everyone else is my repertoire of pass rush moves.  I believe I show a wide variety of moves that are essential to be an effective pass rusher.

When I break down film at first its all about the offense as a whole.  It pays to know what type of offense your going against and the tendencies the offense does on first to third down.  This helps me tremendously because when you know what an offense is going to do in a particular situation it helps me be in the best position possible.  Then it becomes studying the tendencies of the player down to the finest detail.  A lot of my time is looking at the player’s footwork and tendencies that the player shows when watching game after game.  Profiling the player as a “leaner” or an “over setter” this helps me know what moves I can use that are going to be highly effective and some moves that shouldn’t be used.

The toughest player I’ve ever faced has to be Joe Callahan from Wesley.  He’s a great quarterback and took some licks from me the past two years but acted like it didn’t phase him and put great performances every time I’ve played against him.  He’s going to be one of the best to play the QB position at Wesley and that says a lot, because of the rich history of that school.  I give him a ton of respect for his game. 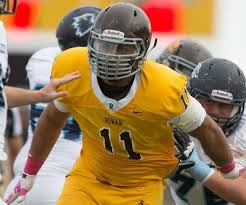 Clay Matthews, and I say this because of his tenacity and non-stop motor.  He doesn’t stop and his motor is something I model my game after.  I do not stop giving it my all until the clock hits all zeros.  Clays ability to rush the passer and be able to play linebacker is something I believe my game resembles.  The versatility I have to put my hand in the dirt and being able to play inside and outside linebacker.

My friend Douglas Morales in high school died from Second Impact Syndrome during the middle of a practice in the summer.  Seeing my teammate seizing on the field still gives me the memory of that day like it was yesterday.  This really shook me up from playing the game I love for a little bit.  Knowing you put your life on the line every snap of every down whether it is from practice or a game came clearly on that day.  It was a sad time for his family and everyone around him during this tough time.  I was mentally not ready to step on the field to play but after some time I had to overcome the fear and know the risks that accompany this great game of football.  I dedicate every game I play to Douglas, because I am so blessed to play football and play every snap like it’s my last.

I always specifically will have to go to the twenty-yard line and kneel and say a prayer for my health and to help my team come out victorious.

My biggest strength is my ability to rush the passer.

My biggest weakness would have to be being too aggressive.  It tends to get me out of position to make a play.

I will do anything the team needs me to do to be successful.  My versatility to be able to play every special teams, rush the passer and stand up and cover.  I will give everything I have to make the team and organization better on and off the field.  Being an ambassador off the field to help individuals is a passion of mine as well.  I will not stop and my motor will keep going coming from a small school I know how much it is going to take to be noticed and I will do all that and some if given the opportunity.

Ray Lewis is my favorite player and being from New York I love the Giants!

If you could have dinner with three people dead or alive, whom would you choose?

I would choose Ray Lewis, Albert Einstein and Stan Lee.