Seahawks OC blames Ricardo Lockette, but he should be wearing the blame 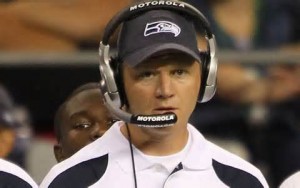 Before the Buffalo Bills hired Rex Ryan, I truly wanted to the Bills to hire Darrell Bevell, that would have been a mistake now if you ask me.  In the biggest game of his career, he made the worst decision in the history of the NFL.  The worst part about the play call was what he said after the game.  He would not take the weight for the bad play call, instead he blamed his wide receiver for not playing more physical.

The Seahawks lost Super Bowl XLIX in the most excruciating fashion Sunday. Malcolm Butler made the play of his life, breaking on Wilson’s pass and beating Ricardo Lockette to the ball. Pete Carroll tried to take responsibility for the decision, even though offensive coordinator Darrell Bevell admitted he dialed up the quick pass. Wilson also took blame for the play, saying he threw the ball “one inch” too far. But offensive coordinator Darrell Bevell said Lockette shares the blame.

Lockette “could have been stronger through the ball,” Bevell pointed out to reporters multiple times.

Bevell will need to work hard to make me feel he is worthy to coach after blaming his player. That is just cold.