Could the Philadelphia Eagles be interested in Jake Locker? 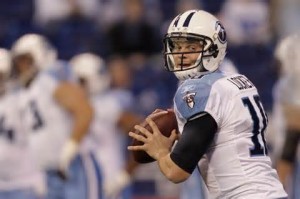 The Philadelphia Eagles have been linked quite a bit to Oregon quarterback Marcus Mariota, but now they are being linked to Tennessee Titans quarterback Jake Locker, according to NJ.com.

At least, that is the informed-opinion of a long-time player agent, who has another quarterback about to be a free agent. According to the agent, who requested anonymity , there will be interest from the Eagles and head coach/personnel czar Chip Kelly in the 8th overall pick of the 2011 NFL Draft.

Locker, who played his college football at the University of Washington, but has been riddled by injuries his entire career.  The former Huskie would be a good fit for Chip Kelly in Philly, but he would be fighting to land a spot on the field with Nick Foles there.