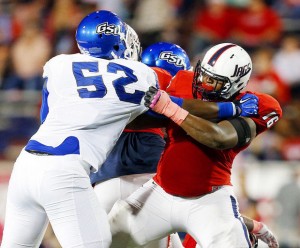 15 teams recruited me out of high school

The South Alabama football program was fairly new at the time that I signed my scholarship and I wanted to be apart of history. And also I was able to pay five years without sitting out which was great for my maturation.

My parents because they always found a way to get me the better things in life even though they might not have had the funds. They always showed me how to respect people and also how to be a great young man.

Yes, I have met with scouts and they’re saying I have great feet, bend, and I use my hands well. Also, my athleticism is great to be an offensive lineman. Only cons they brought up were my size and injuries. 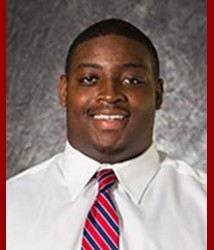 My passion about the game especially in games is what I believe separates me from others. Also, my knowledge of the game, which includes my preparation skills getting ready for football games.

First, I look at the offensive line and try to determine what scheme they are running and if they are successful in their blocking. Next, I look at my opponent for tendencies and giveaways to help me have the advantage in the game. When looking at film on my self I critique the film as if I am my own worst enemy looking at feet, hat & hand placement, finishing blocks, and especially effort.

Kelvin Beachum #68 of the Pittsburgh Steelers…The reason is because he is one of the smallest offensive tackles in the NFL, but he doesn’t use that as an excuse for not getting the job done. His feet and hands fight against defensive lineman are great which mirrors my game.

I’ve had some horrible injuries in my collegiate career that would have made most guys hang up the cleats a long time ago, but I believe in my hard work and determination to get me back on the field. Another reason I did not give up is because playing football in the NFL is my dream; it is what I believe God put me on earth to do. My faith has been tested over the years, but I stand firm in what I believe in.

I always take at least two showers on game day. And also I try not to talk to anyone before the game I believe that your focus for a game has to be at 100 percent, so I stay away from distractions. And of course I pray!

If I were a team General Manager and gave you a second to sell yourself, what would you say?

Ucambre Williams is a smart, intelligent young man with great up side and ability. As a football player I may not have the ideal size, but what I lack in size I make up for it in hard work and heart. I have made some mistakes in life and had some obstacles to overcome but those mistakes and obstacles have shaped me into a great football player and person.