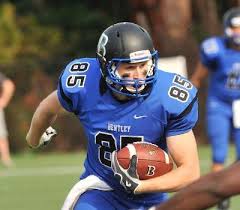 I was not highly recruited coming out of high school. My high school team ran the wing T so we did not throw the ball much. I received interest from most schools in the Northeast 10 Conference as well as many division 2 schools. I did not receive any scholarship offers.

I chose my school based off of the education I would receive and I wanted to go to a school with a solid football program. Bentley offered the businesses curriculum I was looking for as well as one of the strongest division II football programs in the northeast.

Tom Brady is my role model. He started off his career and no one expected anything from him. He worked as hard as he could behind the scenes and he knew that when it was his time he would be ready. Even after he has achieved greatness, he still has that same work ethic, determination, and competitiveness.

About 10 scouts came and talked to me during this past season and came to look at me during practice. They did not say much to me other than general background information questions.

I played basketball and track as well growing up. My high school basketball team lost in the state semi-finals and I was the division state champion in triple jump as well as set my high school record in the 4x100m dash.

I played a little bit of safely in nickel packages in high school. I have also been lined up in the tight end position as well the slot.

I look for indicators that will help me know what coverage the defense is going to be in. I also look for different alignments pre snap that can help to give away coverages. Sometimes the safety will be over the tight end or shaded to one side of the field. The linebacker’s alignment can also help decipher coverages. I also look for where there are holes in the defense so when I recognize a coverage I know where the holes will be. I also look for what some cornerback’s and safety’s might do with their stances or alignment to help me know how best to beat them.

The toughest player I played against was a cornerback from Mercy Hurst. He was big strong and physical and I needed to use precise route running to beat him.

I would compare my play to Eric Decker. He runs crisp routes and is more of a possession wide receiver who has the ability to make the big play.

My biggest strength is competitiveness.

I would bring a multi-functional skill set to the receiving core. I can use my size and route running ability to be a possession receiver as well as my speed and explosiveness to stretch the field.