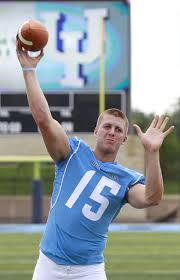 Talked to a couple throughout the season but nothing major. Was just at the regional combine in Houston and got a call three days later that I was invited to the Super regional in Phoenix. They said I have the arm talent to play at the next level,

I played basketball and golf. I was actually a really good golfer in high school I took second and fourth at state as an individual my junior and senior years.

I believe I have an throwing talent that very few individuals have. And the willingness to win and strive to be the best at everything I do whether its practice or a game.

I look for weakness. Where can we beat them? Or it could be an individual that sticks out as a guy we should pick on or stay away from

I’d say Brett Favre for two reasons. One I have never missed a game or even a practice in my life and I take a lot of pride in being available to play and practice. Second because of my playing style I am a competitor and would do whatever it takes to win a game.

In high school our football program had never made the state playoffs and it was a battle to compete my first two years in high school but my junior year something clicked as a team and we made a run at a state title. We lost in the semi finals both my junior and senior years. But it was a major accomplishment to change a program like my class did at my high school.

Not really, I guess I just like to wear the same stuff under my pads

Arm Strength and knowledge of the game

I get a little overconfident in my arm and take some unneeded chances with ball.

I’d be one decision you’d never regret in your life. You’re going to get a perfectionist who is a professional and loves the game. A person who is the first one in the building and the last one out.

Brett Favre was my favorite qb. I’ve been a Steelers fan since I was little in the Jerome Bettis days!

My great grandma, because she has been one of the most important people to me in all my life. Tom Brady, because I love his story and his passion for the game of football. Chris Kyle, cause I have massive amounts of respect for anybody that serves in the military and he would be an interesting man to talk to.