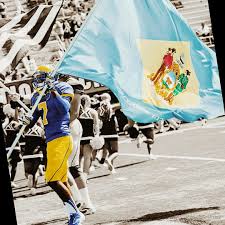 Received over 10 FBS offers with most being from the ACC (Boston College, NC St., Maryland, Duke, UNC)

Academics was big to me for life after football, the player bond on the team, early playing time (played as a true freshman), and playing in a competitive conference (ACC)

My Dad, because of his selflessness with giving back to the community and being very involved in the community, helping others to see the potential in themselves, being a very supportive father and family man, teaching me how to become a man, and the values of work ethic

Haven’t met with any scouts yet but have heard of having the talent and ability to play on the next level and having natural transition when coming out of breaks and back pedal.

I played Basketball & Baseball up through High School and also ran track in high school too.

Physicality, not afraid to stick my head and there and make tackles, especially at the corner position. My long arms also gives me an advantage with getting my hands on receivers at the line of scrimmage and also my football IQ and overall athleticism.

Receiver alignments gives me a good indication at what routes to look for, also down and distance route tendencies. I also look for QB tendencies such as his coverage check and who he is trying to throw to in the route concepts.

Brent Grimes, quick, instinctive and physical; also some Tyrann Mathieu in there with the ability to play different positions in the secondary

Dealing with my knee injury (ACL) my Sophomore year, I had never had a serious injury before and really did not know how I was going to handle it, but I knew that life was not over, being the competitor that I am, having the fight to obtain my goals, and mental toughness, with the support of my family and friends I was able to overcome my injury.

What is your biggest strength? Athleticism, Toughness, Football IQ, Leadership

What is your biggest weakness? Strength, wouldn’t say my weakness but is an area to improve on

My stats may not jump off the sheets due to early career injuries but the talent and ability is there, I am a hard worker who has overcome obstacles to get to point of speaking to with you. All that I need is an opportunity, not only are you investing into a good player on the field but also a leader off the field, one who has no off the field issues, gives back to his communities and is a role model for peers and younger children