Dallas Cowboys linebacker Justin Durant has been cleared to play 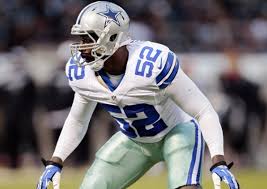 The Dallas Cowboys could lose a couple linebackers in free agency, and Justin Durant is one of those players. Durant, who is set to become an unrestricted free agent, landed on injured reserve after suffering a biceps injury in the Cowboys’ Week 8 loss to the Washington Redskins.

The 29-year-old recorded 49 tackles, an interception and two forced fumbles before going down last season.

Durant graduated from Wilson High School in Florence, South Carolina in 2003. While there he was a teammate to Pittsburgh Steelers linebacker Lawrence Timmons. He was a member of the 2002 HSSR All-State team and was twice named to the Region VI Class AAA All-Region team. Durant went on to have a solid career at Hampton, which ultimately helped him get drafted by the Jacksonville Jaguars in the second round of the 2007 NFL Draft.  Durant has also played for the Lions before reviving his career with the Cowboys last year.

If the Cowboys can somehow land Rolando McClain and Durant back next year and keep their key players they will be tough to beat.