Bruce Irvin blames the play call just like the fans; Probably not a smart thing to say

Bruce Irvin was ejected in the 4th quarter after he threw a punch at the Patriots Rob Gronkowski.  That happened after his team threw an interception on the 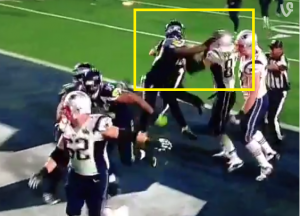 one yard line, and boy did he have his finger out ready to point it.

“We had it. I don’t understand how you don’t give it to the best back in the league on not even the one-yard line,” Irvin said, according to an interview transcript furnished by the NFL. “We were on the half-yard line, and we throw a slant. I don’t know what the offense had going on, what they saw. I just don’t understand.”

Irvin also explained why he got involved in the altercation that led to his ejection in the final seconds.

“I was protecting a teammate. Emotions flew,” Irvin said. “I saw somebody hit [defensive end] Mike Bennett, so I went and backed up my brother. I went about it wrong. Emotions were flying high, and I apologize. But if it happened again, I would go protect my teammate. That’s just how it is.”