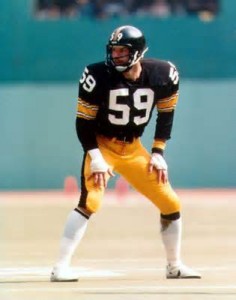 Jack Ham is a legend for the Steelers and he knows a thing or two about tough players. Well he sees greatness in Richard Sherman the Seahawks loud mouth shut down corner.

“I have to laugh when I hear people say you should challenge Sherman,” Ham said this week. “I couldn’t disagree more. When you’re a quarterback and their guy is better than your guy, you go somewhere else. Go after the second- or third-best cornerback. If you go at [Sherman], he’s going to beat you.”

Carolina Panthers quarterback Cam Newton went after Sherman early in the NFC divisional game Jan. 10, and Sherman intercepted the pass. The great Aaron Rodgers of the Green Bay Packers went after Sherman early in the NFC championship Jan. 18, and Sherman intercepted that one, too. It was Sherman’s 26th interception since he entered the NFL in 2011, the most by any player during that time. Well I hope Tom Brady is listening.

“Sherman is as aggressive a cornerback as I’ve seen in a long time,” Ham said. “The interception he had in the end zone [against Green Bay], it looked like he was running the route instead of defending it. He sees the ball. He makes good adjustments. He’s got good hands and he doesn’t drop balls.”