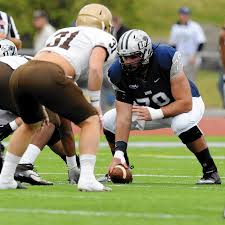 I had a bunch of schools talking to me but i only had scholarship offers from University of New Hampshire, University of Maine, and Stony Brook University.

I committed on the last day of my official visit while I had my meeting with Coach Mac. It felt like one big family during my visit.

My sister Kristina. She was also a division 1 athlete. She was a gymnast at the University of Denver. She had a very successful career and the adversity she had faced during her athletic career as a gymnast is unbelievable. She has taught me so much when it comes to adversity.

Yes, I have met with scouts. They have said that they like the way I play hard physical football.

In high school I also played basketball. When I was younger I wrestled and played baseball.

I would have to say my knowledge of the game. Knowing exactly what the defense is going to do during the pre-snap read makes the game a lot easier

Looking for tendencies. Knowing what players and schemes the defense likes do to in certain down and distance. 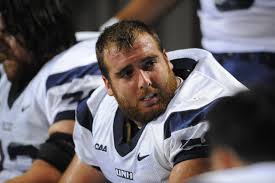 Zach Kerr from the University of Delaware

Having season ending shoulder surgery my junior season. I missed the last 9 games of the season. It was the first time in my entire athletic career that I ever missed a game. I had started 30 straight games before the surgery. My teammates were a big part of it. Just being around them and being able to travel to just about every game made the situation easier. They were always there for me.

There isn’t one specific ritual I do, I just make sure every pre-game goes the same exact way.

I am a hard-worker that takes pride on playing the game hard and physical.