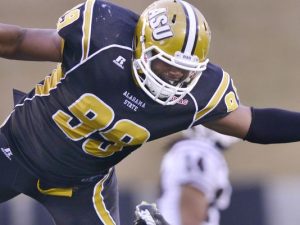 I already had a full academic scholarship to Alabama State University before being recruited, I liked the campus environment and head coach, and Georgia State couldn’t give me a full scholarship until after m first semester due to my late recruitment.

I was born and raised in Atlanta, Ga.

One of my biggest role models is Ray Lewis because he is not only a great player  but a great leader. People gravitate towards him, he practices what he preaches, and he can inspire almost anybody.

During the season several scouts have come through Alabama State and talked to the coaching staff about me and watched film. According to my coaches, the most intrigued scouts seemed to be from the Cardinals and Buccaneers. They liked my athleticism and pass rush ability. I haven’t met with any personally and I have heard anything from scouts since my coaching staff was fired. 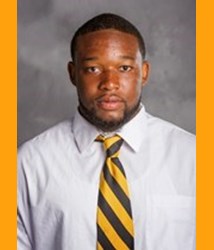 All through my youth I played basketball, and I was a captain on my high school team. I also threw shot put my senior year in high school and made the Georgia State Finals for 5A.

Through our numerous defensive packages at Alabama State, I have lined up as a right and left defensive end, 3 Technique, and Outside Linebacker.

My versatility and athleticism sets me apart from other players at my position. I can play with my hand in the dirt, stand up, cover, pass rush (from End and 3 Tech) and play the run.

When breaking down film I look for tips, tendencies, and weaknesses in my opponent. Also, I look for areas in my game that needs improvement.

I had a hip pointer while going up against the left tackle from Tennessee State University. Although I got a sack that game that was one of my most challenging games.

Terrell Suggs is an every down Outside Linebacker that can function as a Defensive End. I can pass rush from any stance, play the run, and cover. I would compare my game to his.

The biggest obstacle in my life before now (trying to get into the NFL) was trying to regain the attention of scouts my senior year. The coach from my junior year was fired and all film was lost. I went to no camps and some minor injuries to my ankle and MCL caused me to miss my last couple games. I overcame that by making a highlight tape after the season and showing it to every school that would watch. Also, my 3.98 unweighted GPA drew a lot of attention and open the door for academic aid that replace athletic aid temporarily since I was so late in the recruitment process.

Around 2 hours before every game I go to the field, pray, and work 1 on 1’s along with other drills with our best Offensive Tackle.

My biggest strength is my pass rush ability (hands & get off) along with my athleticism.

My biggest weakness is that I can over think things sometimes.

I am a talented player with a high ceiling and untapped potential. I have a solid work ethic and no off the field trouble. I am a versatile every down End/OLB who can learn the scheme, get to the QB, and play the run.

My favorite player was Micheal Vick when he was with the Falcons, then it became Ray Lewis and the Ravens