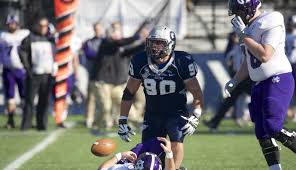 What is your Height/Weight

I was mostly recruited by Ivy League schools and then Georgetown.

Georgetown presented the best combination of academics, athletics, and opportunities for me. I also liked the coaches and felt that it would be a good fit.

My grandpa. He was hardworking, genuine, and could always make you laugh. I grew up watching football with him, and he is the reason football is such a big part of my life.

Not with me personally, but they have been to games and spoken with my coaches. They said that they like my ability to pass rush off the edge.

My motor. A lot of the plays I make come off of second or third efforts and from me out-hustling my opponents. Most defensive ends rotate throughout the game to stay fresh, but I worked hard to get in good shape and played every snap this year besides four. 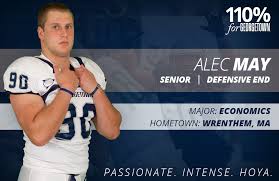 I look for tendencies in the offense and the guys I will be going against that may tip off what play is coming so that I can jump it. I also look at how offensive linemen set up and kick in order to know which pass rush moves will work best against them.

Connor Barwin. He is a great pass rusher and has a relentless motor. He makes plays hustling and chasing ball carriers down from behind.

Not really, I like to get my mind off of the game for a few minutes and just talk to my dad.

I have proven that I’m a relentless worker, and if you give me a shot I will make it tough to get rid of me.