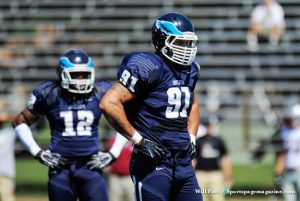 Maybe only 4 or 5 was not from a well exposed program.

I choose my school after leaving a junior college for family reasons. They was offered again at SCSU and saw it as my second chance and acted on it.

Have to say my mother is my role model. She raised my 2 brothers and I on her own right after her husband (my Father) was an officer killed in the line of duty.

No i have not met with any scouts.

Baseball was a big sport for me and a little basketball and soccer.

Middle linebacker, Tight End, O-line, and kicked in all forms as in punting field goals and kick offs.

Have to say my size definitely helps me but my ability to be a 3 tech or 4I player and transition to a 7 or 9 and be a threat off the edge in a pass rush. I am strong at both so i can cause problems from all spots on the Defensive Line.

After watching the film through once I turn my focus the key players i will be facing. I look for weakness or flaws in their game. For example if they lean, where they shoot their hands from, or if they over set things like that.

There was an offensive tackle my sophomore year that was from Indiana University of Pennsylvania who by far was the toughest player i have faced. I cant recall his name but remember he transferred from Pittsburgh.

I’d have to say my game resembles Connor Barwin. Only say that because he plays with great intensity at all times can set the edge against the runs but will hawk down QB’s. He has a great motor and my coach also said that my game has traits of his. Been told I also have a great motor with practice and games.

This may not big the biggest obstacle but defiantly had a big impact on my life. My uncle who was my best friend died in a motorcycle accident the night before a hall of fame game i played in. I was so destroyed from the incident but I had thought about it and knew the right thing to do was go play the game the next morning.This was also the reason i left the junior college i was attending but realized i was wrong for leaving and happy i got a second chance.

I always think of my father and love ones lost and reminds me of how lucky i am to have this game and those people they impacted my life. say a few words to them promise i will play to the last second as hard as i can then go play. 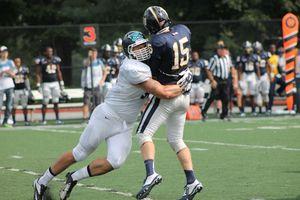 My size and motor. I have a great motor when i play or practice. along with being very good at setting edges. Also have a very good pass rush ability.

Biggest weakness I have is playing a little high at times.

I am a hard nosed, hard working blue collar guy that make others work harder by just being around me.

Has to be between Emmet Smith and Charles Haley.

I would have Dinner with my Father who was killed when I was a year old. My grandfather who passed the year i was born. last person would be difficult to pick from all the family members i lost but probably between one of my uncles or grandmother.