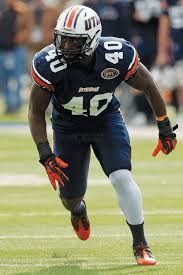 University of Tennessee at Martin

Monica Bell my mother a woman that raised 3 kids mainly on her own stayed very strong through the process and never complained once. She gave me strength and a strong mind set that no matter what situation you are in theirs always good that can come out of it.

Yes and mainly could I make the transition from playing outside linebacker in college to inside backer in the NFL. To answer that question I always answer yes with the defense we ran in college I had to move from the outside backer position to inside with different checks and play calls so it wouldn’t be a problem at all.

WR, RB, FB During high school and Safety at the college level

Fast to point of attack and Great Game awareness

Movement and blocking schemes of the offensive line from center out to the tackles and any keys that would help me get a jump on my opponent such as slow first step not sound at pass blocking what moves would work to defeat run blocks. 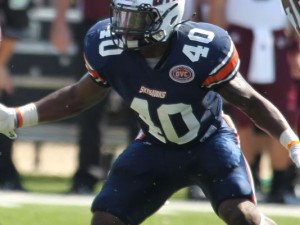 EIU former quarterback Jimmy Garoppolo had to be the smartest player I’ve ever faced. He made it very tough to get a sack or even hurry him in the pocket but I still was able to sack him maybe 5 times in the 2 years I have played him.

Clay Matthews with him being so versatile with the skills to pass rush, run stop from every linebacker position and his ability to transition from outside to inside within a snap.

The biggest obstacle to me was coming from high school having all the big stats numbers on both sides of the ball being name all-State MVP and more then my freshman year of college playing nothing but special team and not really seeing the field on defense or offense. With me being young at the time I couldn’t understand that and it took time talking with the older guys on the team and them telling me your time will come just continue to work on your craft and you will be fine.

If I had a second? Boom(that’s the sound of me hitting the ball carrier). No seriously, I would make sure they knew I was 230 pounds not 200 like the websites say for some reason. And that I’m a solid athlete and man on and off the field

LaDainian Tomlinson when he was at the chargers and favorite team had to be the dolphins when Ricky Williams was at running back.