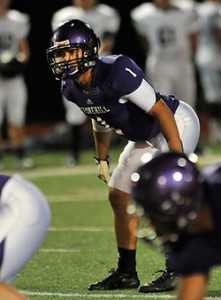 I play for Stonehill College in Easton, Ma, about 30 minutes outside of Boston.

In high school coming out of Rhode Island, I only had a couple schools that were lightly recruiting me. It wasn’t until I went to prep school down in Chatham, VA at Hargrave Military Academy that I started to garnish some attention, and at that point I had about 10 D2 school programs recruiting me as well as a handful of 1aa programs.

For me it really came down to how comfortable I felt on my official visit. When I was on my official at Stonehill I meshed so well with the team and staff that I knew it was a place that I could be successful at. I saw where the program was heading, and I wanted to be apart of that, and I know it was the right choice for me.

I grew up in Bristol, RI, but I went to school in Providence, RI.

My role model would be my mom. It is one of the easiest questions for me to answer. I get my hardworking trait from her. Growing up she would sacrifice anything and everything for her kids to be successful. She worked as many as 5 jobs at the same time at one period in my life. For a mother of 3 to be able to do this, still be around, never complain and always support us no matter what we wanted to pursue has been one of the most motivating things in my life. My mom is my rock and I wouldn’t be here without her, there is not one woman I know that is more hardworking then her while being the sweetest person you ever met. That’s why she is my role model.

I have not met with any scouts yet, but December 7th I will be playing at the National Bowl down in Miami, FL at FIU and hope to garnish some attention from them during the All Star weekend.

Yes, I played soccer until about middle school but then stopped really focus on football in the fall, I played basketball and lacrosse for a little in high school as well, and I also ran track.

In high school I played both Quarterback and Running back, and on defense I played Strong Safety.

I feel my competitive drive really separates me from other players at my position. I think it is simply because I live and breathe perfecting my craft at being a cornerback and I always want to get better. I just want to be the best Cornerback on the field at all times and the fact I am always trying to get better and perfect my fundamental techniques as well as learn new techniques I feel I just bring a lot to the table. I may be 5’9, but I am both physical and fast, and I play with a little fearless mentality at corner and I think the way I see my position just gives me an edge over other corners.

That’s a great question; I mean there is so much I look at. It really depends though, if I am evaluating an individual player I look for their tendencies, and focus on their techniques, whether its staying low in their transitions, their hand work or even their physical ability to move and change direction, that helps me gauge weekly matchup’s and what I can and can’t get away with against lets say a WR week to week. From a defensive scheme standpoint I watch the opposing team’s offense and once again look at what they do from a “situational” standpoint and then put myself and run through what I would do in all those situations, from a technique and a play call standpoint. It is also good to watch how the QB responds to certain looks and disguises, watching film really becomes like studying for a test. The more prepared I am going into each game the less surprises I see which helps me play fast football.

The toughest player I ever faced was probably Martavis Bryant Wide Receiver for the Pittsburg Steelers who was my teammate when I played down at Hargrave Military Academy. He is such a physically gifted athlete with such great size and speed he was hands down one of the most difficult matchup’s I ever faced in my football career. Having been able to play against him on my team day in and day out in practice really prepared me for what I would face moving forward with my career.

I would have to say Brent Grimes, we essentially have the same measurable, and play very similar, a lot of emotion and energy combined with a knack for making the play when it counts most. Plus it helps he was a D2 guy like me to.

The toughest obstacle in my life for me has probably been, the ongoing battle in dealing with the financial struggles my family and I have faced. My mom worked 5 jobs almost my whole life to support my family, and always provide for us, but that means there has been a lot of sacrifices we have had to make. Times have been rough and when there are financial situations in a household life is simply different, it can make it hard for people to even stay motivated. But I have overcome all of this by really staying positive and keeping a smile on my face. I think it is important to find the good in everything. Seeing my family and friends happy and healthy is all I can ask for. Knowing I always have at least that keeps me motivated, humble and hungry for success. I was once told to “never be ashamed of your own struggle” so I embrace it and turn it into positive energy.

Not really, I mean I always throw on the headphones game day that’s a must, it really doesn’t even have to be a certain playlist, and typically it is whatever the hottest new songs out are at that time I am usually listening to. I will say I am all about being balanced, for example if I tape one ankle I have to tape the other to match or I wont feel right. I also will take my cleats on and off, and even tie and untie them until they feel just right, that’s probably the most important thing.

It would have to be worth ethic, I genuinely believe very few people can outwork me, if you put in a ring with someone no matter what I am not getting out until the other person gives up first, and that’s how I approach games, practice and my off-season training.

I have a tendency to overwork, and push myself too much; I have learned my lesson as I have progressed through my career. Finding the balance between pushing yourself to the limits and getting enough rest is crucial, and that’s something that is tough to do when you love what you do.

My favorite player growing up was Ty Law, and it helps that he played for my favorite football team the New England Patriots.