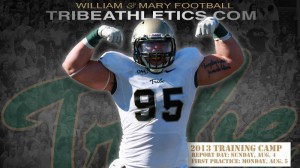 The college of William & Mary

I knew W&M could offer me the chance to play at the next level while at the same time giving me a great education.  I couldn’t find that combination anywhere else.  I also saw the success Sean Lissemore and Adrian Tracy had, two DL who were drafted from W&M the same year I was being recruited.

I have two major role models.  JJ Watt and my father.  Ever since JJ was drafted I was interested in his story.  Hes a hard working guy who wouldn’t take “no” for an answer.  I definitely try to emulate him on and off the football field.  Second, my dad taught me about work ethic and how I would have to work for everything I wanted.

Scouts want to see if I can do drills on my feet and drop into coverage as a stand up backer or end.  They know I can pass rush very well, but the combination of the two would make me more valuable.

Yes, I played basketball, baseball, and football growing up.  When I got into high school I played football and threw shot put, javelin and discus for our track and field team.

Yes, I also played tight end in high school on the offensive side of the ball.  When I was being recruited some schools were recruiting me as a tight end as well.

I play with great leverage, especially while rushing the passer.  I think I have a great combination of size, speed, get-off and strength.  However, above all I think I have more “want to”.  I don’t know how to quit on a play and will not accept being beaten.

While watching film I like to watch for all the offensive packages, if I feel like I can get a read on the specific alignments it can only help me.  On a more individual level, I watch the offensive tackles stance, pass set, and body position.  I also like to see if he is a one arm puncher in the pass or a two arm puncher.  I also like to see if I find any pre-snap tendencies.

Terrence West, running back from Towson.  Very talented and a great competitor.

I feel like I compare to Paul Kruger on the Browns.  Both hard nosed players who can with with speed or power and we have similar body types.

Being told I couldn’t achieve what I wanted.  However I know that hard work can overcome a lot of obstacles.  If you don’t believe in yourself who else will?

I love to put my headphones on and listen to music before games.  I’m not very social before a game, it helps me get in the zone.

My biggest strength is my determination.  I don’t know how to quit.  I never saw myself as the most talented player in the country, but I was going to make sure I was the hardest worker.

Sometimes I push the envelope in terms of training, I’ve been know to sneak workouts in after our team workouts.  Sometimes recovery is more important.

I would tell you that you’re going to get a guy that eat, sleeps, and breaths football.  No matter the circumstances I will find a way to be successful.  Above all you’re getting a tough hard nosed guy who plays with passion.  I have a non-stop motor and am a total competitor in all aspects.

I was a huge New York Giants fan growing up.  Michael Strahan was my favorite player.