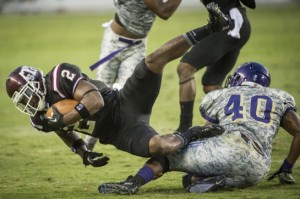 Prayed over it, took my official visit and wrote down the pros and cons of each program.

Kevin Beard, formally known as “KB”. He is my role model because he is a great father figure, always positive, hard worker, and strives for greatness in everything he does. Very humble down to earth and he has a passion for helping others, especially young children.

Yes, I have actually met with about 15 teams , there common concern is my size . However, they do love the passion and energy I play with, and would love to see me closer to that 225 range on my pro day.

Yes, high school I also did wrestling and track

The depth of running back (especially in pistol, and shotgun formations)

how well does the linemen protect on pass plays.

how good is the opponents left tackles especially if quarterbacks is right handed.

Does the ball carrier carry the ball loosely.

How does the quarterback react to pressure.

Plays calls on third down,

how well does the running back protect in the pass game.

How often is the #2/#3 wr on/ off the field, Personnel substitutions (wildcat packages, etc), How much effort do you get from wide outs on run plays, or passing plays when they are not intended to get the ball.

You Can Check Out Jerome’s Highlight Here

My Preparation, the amount of hours I put into my craft during the offseason. Not to mention, the countless hours of film I watch on my own often not including the coaches.

Sean Spence because we both are considered “short and under-sized” However we both have a noise for the ball, have good explosion at the point of contact. Self- motivated and often bring the energy and swagger. Also , We both have had knee injuries that set us out at one point and time but we used the setback as motivation and allowed the situation to give us even more hunger for the next time we did get back out on the field.

Losing my grandmother one week after departing for college. I overcame it by my praying and always thinking to myself if she were still alive what would she want me to do.

Pray over the phone with Mr.Vernon Shazier

Knowledge of the game, passion for the game

Perfectionist, wanting everything to be perfect. Playing for a smaller FCS program.

Muhammad Ali , Sean Spence, My grandmother Christine Reed who is no longer with us