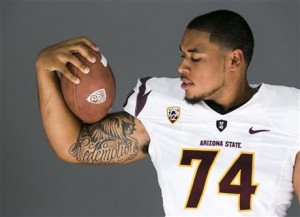 I discussed it with my family after we had took my official. We came to the conclusion that Arizona state was the best place for me.

My role model would have to be my mother. Growing up without a father figure and seeing the sacrifices she had to make so that we were able to be successful takes a strong person.

No I have not met with any scouts.

I played basketball the majority of my childhood

In high school I was a Tight End and Defensive end

My quickness and aggressiveness off the snap of the ball.

Mainly for tendencies, I look at different fronts they might play on defense, and I also look at what gives the defenders the most problems. 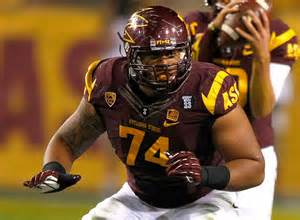 If I could compare myself to one player it would have to be  Jeff Allen , I think he is an athletic guard with the quickness and aggressiveness that I can see myself playing like.

One of the biggest obstacles in my life that I had to overcome would be my grandmother passing away a couple days before our first game this year. She played a huge role in getting me to this point in life. It’s something that I just had to accept and say that I know she’s in a better place.

Looking at a picture of my family before I take the field.

My biggest strength is my athletic ability at the guard position, being able to be quick and aggressive off the snap and move the defenders in front of me.

My biggest weakness would be playing too high at times

I would say that I am the ultimate leader. I will always want to learn more about the game and give 100% at every opportunity presented. I’ll come to work everyday and attitude/ effort is something you’ll never have to worry about. I just want to help a team win football games, wherever that may be I am committed to give it everything I have.

Demarcus Ware, and the Dallas Cowboys

If I could have dinner with three people, the first person I would pick would be my brother. He passed away when I was in high school, and I would love to hear what he thinks of everything now. The second person would be Michael Jordan, simply because he was such a great basketball legend, and someone that rarely speaks about his accomplishments. The last person would be Ray Lewis, I just think he has such an interesting story and so much experience playing the game of football it would be good to listen to what he has to say.