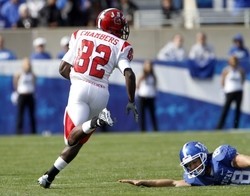 My name is Gabriel Chambers

I played 3 years at Jacksonville State University in Jacksonville, Alabama but I finish my senior year in Montgomery, Alabama at Faulkner University.

I had about 12 full offer

My cousin Maurice Dupree played and set records there, so I decided to go there and try to break them, and plus me and my high school quarterback Coty Blanchard who I’ve known since I was 3-4 years old was going there so I was like why split up. We won a state championship together so I was wanting to win more with him cause he was my quarterback and brother.

Fran Blanchard, Thomas Curry, Shawn Sutton, and Maurice Dupree. Coach Blanchard/Curry has always been a great father figure to me since I was little and actually help me throughout life. Coach Shawn Sutton is a role model to me because he is a caring coach and he will help you out and any situation no matter what it is. Maurice Dupree is a great role model cause he always sets records and goals for me to achieve them. He always push me the extra step in our workouts and running. His work ethic is crazy.

I played every sport but soccer

I played Running Back, Cornerback, and Safety

I break down film and study film by studying in a triangle. The Outside Linebacker, Cornerback, and the Safety. I read their movement and it allows me to play faster

I don’t know because I done went against a lot but I’ll have to say Aj Davis and Pierre Warren. I played college ball with them n they both were fast and smart

I’ll say being injury during my college career. Missing 4 games my Sophomore year in college and then missing 5-6 games in my junior year. I overcome them by taking care of my body more and I done a lot of rehab for my hamstring

Has to be my height and not big hands

I’ll say I can bring leadership quality, a great teammate, and a playmaker that is consistent and I’m able to handle adversity

Growing up it was Randy Moss, Barry Sanders, Chad Johnson. My team was Atlanta Falcon and the San Fransico 49ers