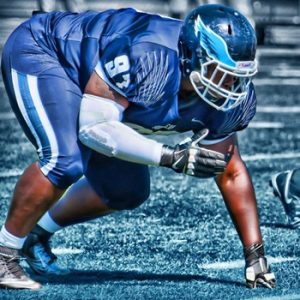 Just finished my four years at Southern Connecticut State University. How many teams were recruiting you out of high school? Ive had numerous team such as Temple, Rutgers, Stony Brook ,Holy Cross, Lafayette, a handwritten letter from Princeton, Fordham university, and Wagner College.

I only played football my senior year of high school . My father passed when I was seven years old and my mother never really been a sports fan or knew the process of things. After the season I’ve had plenty of letters but I intended to go to Lafayette college because me and their coach John Loose had a good relationship and showed enormous interest. My next step at this time was to take my SAT’s. The first two times i took my SAT’s they lost my scores. I took it for a third time with not as much effort, which resulted in low scores. All of the coaches from these schools suggested I go to a prep school or junior college. At this time my knowledge of this process was nonexistent and I truly didn’t know whether I wanted to continue playing football or not. At my all star game Southern and Post found me and surprisingly my scores were good enough for their program. I visited both schools but Southern gave me a better feel , so I went with Southern.

My role models are definitely my Older Brothers. Both of them graduated and are major reasons why I am successful today. These guys are hard workers who would do anything to help support me and the rest of my family. Have any scouts met with you yet, and if so what are they saying?I haven’t got the chance to talk to any scout personally yet. Did you play any other sports growing up?I was a huge fan of basketball and I enjoyed playing soccer as well. Did you play any other positions in football? I actually played RG last weekend at the national bowl.

My physicality, motor, hands, and quickness. I enjoy chasing down a tackle whether its 10 yards or 50 yards away. When you are breaking down film, what do you look for? I look for formations on the offense , tendencies from the offensive line, and the down and distance situations and plays that are called at that time. Who was the toughest player you ever faced?I never had an ultimate challenge on a one on one basis. However IUP my redshirt sophomore year was the toughest game I have ever been apart of.

Vince Wilfork, We are both good ball players with almost an identical physique.

My toughest battle was the lost of my father at the tender age of seven. I battle this everyday by becoming the man he would be proud of , whether its football related or not.

Not Really , I just tend to stretch a couple hours before the game and try to get a good sweat going.

My hands techniques could be sharper.

I’m not about the fame, I’m all about contributing in any aspect that will help the team win and become better. I live for this game , I would play even if it didn’t pay.