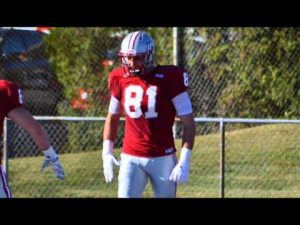 University of Pittsburgh, Wisconsin, Indiana University of Pennsylvania
How many teams were recruiting you out of high school?
20+
How did you choose your school?
I chose Pitt because of Coach Wannstedt and his staff
Where are you from?
Jefferson Hill, Pa
Who is your role model, and why?
My brothers and father. Being the youngest I grew up seeing them achieve things and doing things the right way. It has motivated me through my athletic and academic career.
Have any scouts met with you yet, and if so what are they saying?
Yes, most of the scouts Ive talked to said that I need to add mass for the next level.
Did you play any other sports growing up?
Yes, basketball 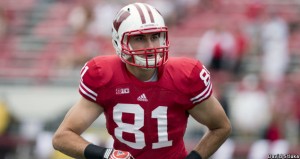 Did you play any other positions in football?
Quarterback, Defensive End, and Linebacker
At your position, what separates you from others?
My hands, quickness, and footwork
When you are breaking down film, what do you look for?
Run Game:Footwork, Hands placement, Helmet placement
Pass Game: Release, Second level move to avoid contact, Top of route, Catching with hands not body
Who was the toughest player you ever faced?
Jabaal Sheard my freshman year at Pitt.
If you could compare your play to one player in the NFL who would it be and why?
Heath Miller, He’s a very consistent blocker and really effective as a receiver
What was the biggest obstacle in your life you had to overcome, and how did you overcome it?
All the different head coaching changes I have gone through. Overall I have played for 8 different head coaches during my college career. At Pitt I had Dave Wannstedt, Phil Bennett (interim), Mike Haywood, and Todd Graham. At Wisconsin I had Brett Beliema, Barry Alvarez (interim), and Gary Anderson. My 8th head coach was Curt Cignetti at Indiana University of PA.
It was definitely hard dealing with this because no one likes coaching changes. I tried to make the most of it. I learned a lot from a number of different coaches. I learned different techniques and schemes that have helped develop me into the player I am now.
Do you have any pre-game rituals?
Drink a 5 hour energy
What is your biggest strength?
Hands and Quickness
What is your biggest weakness?
Weight
If I were a GM and gave you a second to sell yourself, what would you say?
I am an all around Tight end that can be effective in the run and pass game.
Who was your favorite player and NFL team growing up?
Brett Favre
If you could have dinner with three people dead or alive, who would you choose?
My Grandpa, Michael Jordan, and Steve Jobs
Related Topics2015 brock deciccoBrock DeCicconfl brock decicconfl draft brock decicconfl draft prospect brock decicconfl prospect brock decicco