Did you know Russell Wilson and Madison Bumgarner were once baseball teammates? 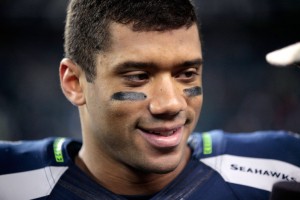 The Seattle Seahawks won the Super Bowl last year and the San Francisco Giants won the World Series the other day, but did you know the two men responsible for their Championships were once teammates?

Wilson revealed that little nugget Thursday, a day after Bumgarner was named World Series MVP for his role in the San Francisco Giants’ seven-game series victory over the Kansas City Royals. Wilson, once a highly regarded baseball prospect who was drafted both out of high school and then again while playing at North Carolina State. The ironic thing is both Bumgarner and Wilson were teammates back in high school.

“So, funny story about Madison Bumgarner,” Wilson said. “We were roommates at the (East Coast) Showcase coming out of high school, the top 100 players. We were roommates also at the Area Code games as well. I’ve gotten to know him over the past few years. I haven’t gotten in touch with him lately, but yeah, I used to play with him. I think we won it all at that showcase. He’s a big guy, can really throw it, great athlete. I’m excited for him, he’s a great competitor.”