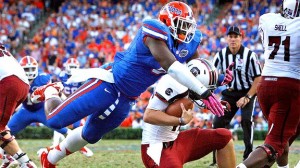 Cons:MotorJoggingPass rushContainTacklingRead option        Dante Fowler Jr. is a defensive end at the University of Florida and became a household name around The Swamp last year. After his impressive 2013 season concluded he drew comparisons of former SEC defensive end JaDaveon Clowney. Fowler might possess some of the same characteristics and skill sets as Clowney but he will not be the number one overall draft pick in the 2015 NFL Draft.

This is not a knock at Fowler nor a dismissal of his ability to become a top first round draft pick. The simple fact is that Fowler stats last season were similar to Clowney’s last season in the NFL. The difference being Fowler did not see half of the double teams that Clowney saw on a regular basis. Dante will most likely become more accustomed to double teams this upcoming NCAA Football season.

It is no surprise to anyone that strength and size is a desirable attribute to NFL scouts. Dante Fowler Jr. possesses both of those attributes and puts them to good use on the gridiron. When watching film on Fowler his strength jumps off the screen the first time he makes contact with an offensive lineman. Fowler’s ability to defend against the run is elite on the collegiate level. He holds the line of scrimmage, if not pushes it into the backfield, clogs up open holes, and has the strength to arm tackle running backs while being blocked by a lineman. Fowler has good speed for his size and uses it when he has a little open space to work with. With all of that being said one of the best features that Fowler has is his hands.

When Fowler is engaged with a lineman his hands are very active which allows him to make plays while being blocked. He has great hand technique when engaging with the offensive lineman giving him the capacity to free his hands to make tackles and go for the ball. Dante Fowler Jr. had three forced fumbles this past year, which can be attributed to his awareness and hand technique.

Fowler also got to the quarterback three and a half times last year. It is amazing how many times he came off the end untouched to get a sack. This exact situation was how he tallied three sacks this past year. Those sacks can either be attributed to the defensive coordinator’s genius or the offensive line coach’s inaptitude.

As good as Fowler is there are still a number of areas that he needs to improve on in order to take his game to the next level. After watching film on Dante one has to question his motor and endurance. On a number of occurrences he can be found jogging or giving up on plays. That might be a characteristic that he shares with Clowney. However, this is one area of the game that should be pretty easy to correct with a little hard work and dedication.

Another area of the game that Fowler can improve is tackling and reading the option. Fowler obviously does not have a huge issue with tackling as evidenced by the 50 tackles and 10.5 tackles for lost recorded last year. Nevertheless, there were multiple tackles missed because of technique in pursuit. Fowler can work on squaring up to the runner and driving through them. If improvements were made in this area he would have the ability to set a record for tackles in a season this year.

Dante Fowler Jr. is an athletic freak that could become a great defensive lineman in the NFL. It will be very interesting to see how Fowler plays this year with increased game planning and doubling teaming he undoubtedly will receive.SCORE 86