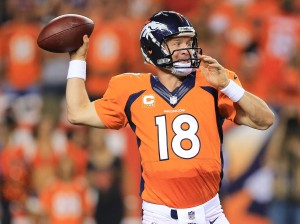 Every year we have come out with our Pre-Season Award winners list and we have done pretty good.  Last year we had Peyton Manning going to the Super Bowl, Kiko Alonso as the defensive player of the year (even though he came in second) and we had quite a bit of the players on the lists.  This is a new year though so here we go.

Peyton Manning – Denver Broncos – It is really hard to shy away from the Broncos because they are so stacked. Peyton Manning is a very talented player with tons of talent around him. It will be extremely hard to repeat what he did last year but it is very hard to pick any other player at this point, because Peyton is a stud.

Colin Kaepernick finally gets his ring this year.  Since entering the NFL Kaepernick has been a very solid player, but this is a year that the Niners need to win it. They have the structure to be a Super Bowl winner, but while their defense has been the better unit of the three, this year the Offense takes major strides.

Peyton Manning will have another huge season. I do not feel he will break records again but the offense will be very solid.  I expect the Broncos team to explode out the gate this year. I expect him to throw for 5k again in 2014, and he will be well over 35 touchdowns.

LaVonte David is a very solid player and technically sound as a linebacker.  David should have been defensive player of the year last year.  David is a stud, he finished in the top 10 in 2013 in tackles, had 7 sacks and finished with 5 interceptions. I expect him to have a better year in 2014.

Comeback Player of the Year

Robert Griffin III of the Washington Redskins will shine in 2014 under Jay Gruden. Gruden understands quarterbacks and I feel the RG3 with Desean Jackson, Pierre Garcon and Jordan Reed will shine in 2014.  The Redskins will rebound and be a very good football team. I am not sure they are playoff team at this point, but they will be much better than the Cowboys and Giants.

Offensive Rookie of the Year

Last year I chose Aaron Dobson who had quite the season but was kind of a dark horse candidate.  This year I feel that Mike Evans will end up winning rookie of the year.  The big wide out from Texas A&M will be in a very pass happy conference and the big target will shine. I feel Sammy Watkins will have a huge year, but still feel that Mike Evans will produce more touchdowns.  I am picking Mike Evans.

Defensive Rookie of the Year

Khalil Mack will eat in his conference and I feel he will not Jadeveon Clowney will be the Defensive Rookie of the Year.  Mack was a sack machine at the University of Buffalo and he will be a huge asset to the Raiders defense in 2014. I feel Mack will also have the most sacks of any rookie breaking 10 plus sacks in his first year.

Coach of the Year

The Buffalo Bills have not made the playoffs in 14 seasons, but this year Doug Marrone and company will lead the Bills to their first playoff birth since the Music City Miracle.  The Bills are a very young team, but this is the year they get over the hump.  Whatever coach leads them to the playoffs deserves coach of the year in my opinion.