John Elway’s son looks like a “Moron” in his mugshot 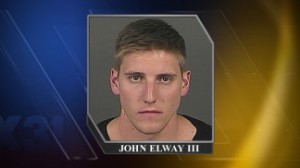 Earlier today John Elway the GM of the Denver Broncos called his twitter followers “The microphone for morons”.  That is funny that he would say that, now that his son’s case has come out. Not only does his comments look bad, his son was arrested for putting his hands on a women.  I don’t know who is a bigger moron, his son or the twitter followers.

@adamlevitan: John Elway at an NFL event in Philly Saturday: “I call Twitter the microphone for morons.” (via MMQB)

I think since, the GM had the nerve to call all twitter users a Moron, I thought it would only be right to say how moronic his son looks in his mugshot after putting his hands on a female.

Jack Elway’s arrest early Saturday stemmed from a domestic incident in which he allegedly pulled a woman out of his car by the hair, according to the affidavit.

John “Jack” Elway III, the 24-year-old son of Broncos executive John Elway, was allegedly driving with a woman about 1:40 a.m. when an argument broke out, the woman told police.

Near the intersection of West Colfax Avenue and North Lipan Street, Elway reportedly stopped the car and pulled the woman out of the vehicle by her hair extensions, causing some of her real hair to be ripped out. The woman attempted to stand up, at which point Elway shoved her back to the ground, she said.

The alleged victim said she suffered scrapes to her knees and general pain.

Broncos have already stated, they will not do anything for Elway because it is a personal issue, but it is funny that Elway had nerve to say something about his twitter followers, but his son put his hands on a girl……..HMMM