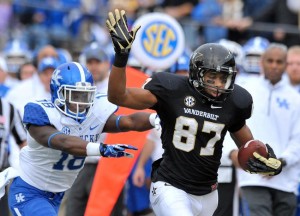 Our brothers at Sports Ruckus have been Grading the Draft over the past several weeks, and today the NFC East is up.  Eagles fans feel they had a great draft, but let’s see how our partners felt about the Eagles draft.

Philadelphia.  It’s called the City of Brotherly Love but seriously…have you seen the fans at the draft…or the game…or ANYWHERE??  Love…huh…let me put it into perspective for you-The Vet (stadium prior to the Linc) had a jail cell at the bottom of it….A JAIL CELL!!  But you can understand why we…oops…they…are such angry people.  It once snowed in April, they have to smell New Jersey constantly (seriously, WHAT IS THAT!?!?), and don’t forget we…I gotta stop doing that…they…had to deal with Rich Kotite, 2 Detmers AND Freddie Mitchell!!  So needless to say the chubby faced, fast talking mastermind Chip Kelly would have to ace this draft in his second year.  As I peruse through this draft there are two themes that pop out at me.  The first is value.  Their 1st round pick was Marcus Smith, LB from Louisville.  At 6’3”, 250lb, he fits the 3-4 defense LB/DE mold.  His speed pops off the tape. Also, he seems to have a high motor…but…he also can be undisciplined and at times can miss his reads.  Good in coverage but can use some work with his hand placement.  He probably would have been around in the second round and could’ve filled another need at that pick so I feel this was a reach but with the hunter Trent Cole and Conner Barwin mentoring him coupled with linebackers like the play making Mychal Kendricks and intelligent vet DeMeco Ryans behind him he might blossom into a productive starter.  Don’t be surprised if he moves positions. The next 2 picks seem to be better value picks.  Jordan Matthews, WR from Vandy seems to possess the tools to be a major contributor in the Eagle’s offense under Chip and Pat Shurmur.  Great out of his breaks, soft hands but a lack of concentration shows up at times in his drops, and at 6’3” 212, his 4.46 speed is satisfactory.  He will need to bulk up to make him a little more effective at the NFL level but the strength and conditioning Coach Josh Hingst might be able to work on that. Honestly, there’s no way he would’ve made it around to the Eagles again in round 3.  That’s where the real value comes in. Not only did Round 3 give them value but it also tapped into the second theme-Familiarity.  3 of the Eagles next 5 picks were from the Pac-12 and two were players from Oregon.  This could either end up a successful game plan or end up like dating an ex-girlfriend multiple times because you already know her brand of crazy (God knows I’ve done this). We only have one previous year to evaluate that line of thinking but so far…not bad.  Josh Huff is video game fast, Jaylen Watkins (yes, half-brother of Sammy) has good hips and is fluid but needs to increase his awareness/ball location and the rest of the draft may help with defensive depth.  Fat guys everywhere in Philly will always have some “brotherly love” for Andy “the Walrus” Reid but Chip is definitely bringing a fresh feel to Philly.  Go ahead and say it Philly-Fly Eagles Fly.

Are you a Philadelphia Eagles fan? Do you buy tickets?  You can save money by using Ticket Monster, see how much you can save here.