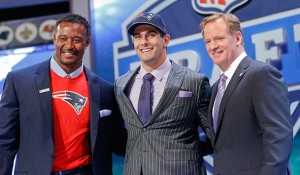 Sports Ruckus writer Justin Walters has graded the entire AFC East, and while some Patriot fans might not like his grading, he has some very valid points.  Let’s see what the Patriots finished with.

No one will question the genius of Bill Belichick but on draft day the genius may have out smarted himself. Is that a word? Well you know what I mean. As a team that clinches it’s next division title the day after the previous season ends the Patriots focus is on the playoffs and ultimately the SuperBowl. So the goal should be to stop the top teams and give Tom Terrific more weapons. He hasn’t had a number 1 wr since Randy Moss, one of his other favorite targets is currently being tied to every crime that has ever happened in Massachusetts, and the always injured Gronk is currently somewhere dancing violently with no shirt on.  So you would have assumed somewhere along the line a receivers name would be called.  I have no problem with first round pick DT Easley from Florida, think he could be a stud. Picking a QB in the 2nd rd made little to no sense and I am sure Tom feels the same way. The picks to follow consisted of a good amount of players who most likely won’t see the field this season. The 7th rd pick of Wide receiver Gallon could turn out to be a steal. Overall I just wanted/expected more from New England. If Jimmy G sees the field for any meaningful snaps, the season is O V E R .Dominique Easley DTJimmy Garoppolo QBBryan Stork CJames White RBCameron Fleming OTJon Halapio GZach Moore DEJemea Thomas CB/SJeremy Gallon WREasley if healthy is one of the top 15 players in the draftGaroppolo is the Pat new QB of the future. He had a lot of success at Eastern Illinois.Stork has the talent to play right awayWhite is a hard runner and he is excellent in pass protection.Gallon is a short tough WR who should fit nicely into the Pats O

Are you a New England Patriots fan? Do you buy tickets?  You can save money by using Ticket Monster, see how much you can save here.