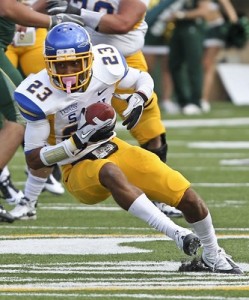 San Jose State WR Noel Grigsby is preparing to join his QB David Fales & fellow WR Chandler Jones in the NFL. Although he suffered a torn meniscus last October that prevented him from having the type of season he envisioned, nor was he able to play in a postseason all-star game, Grigsby has quite a few teams making contact as the draft nears- 10 teams in the past week.

Grigsby was poised for a breakout senior year after an ultra-productive junior campaign, where he amassed 82 receptions, 1,307 receiving yards, and 9 touchdowns. He ranked second in the WAC in receptions and receiving yards and ranked tenth in all of the NCAA in receiving. Just 6 months after his injury, Grigsby measured in at 5’9.5, 185 pounds and ran in the 4.6 range.