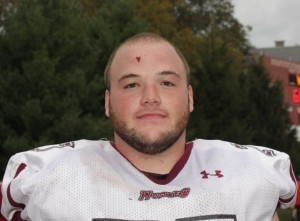 How many teams were recruiting you out of high school? Where did you choose and why?

I was getting recruited by penn state and pitt early but both school told me I was too short, so then all the PSAC schools came in and after the visit to Bloomsburg and meeting Coach McBryan the O-line coach, I knew this was where I belonged.

My personal goals were to get better the my pass protection and not be over aggressive and homely continued to build on the success last year and become first team All American.

I met with some during the season they just ask personal questions to get to know you a little  better.

I think what separates me from others is my aggressiveness on the field and willing to put the work in each week to help our team achieve our goals.

I look at what fronts the teams like to play verse 1 back and 2 back offensives, what kind of stunts they run and when they like to mix those up and what downs they prefer to stunt. I look at DT hand placement and what each DT strength is and if they like to rip/swim/spin what kind of  moves does he to try to get of blocks.

I haven’t really compared myself to anyone in the NFL. When I was younger I was a big Larry Allen far he was tough mean and extremely strong, later i always watched Chris Snee and Jahri Evans because both are the best and the OG position.

I think my strength  is my run game blocking

Im blue collar, hard working kind of guy that is will to do anything and help anyone out

My grandfather, he  played a huge part in my life I was always with him when I was younger and he always had my cousin and I out playing down the park or going to the town pool just about everyday during the summer, He was a great man and defiantly a great role model.

Who was your favorite team in the NFL and why?

When I was younger it was the Cowboys, I liked Larry Allen, Emmitt Smith, Troy Aikman. Since then I still watch them but more of a players fan than team fan.