Missing hull to the Vikings ship? 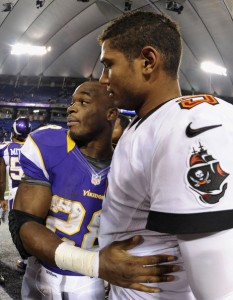 Josh Freeman got exactly what he needed, a fresh start. The Minnesota Vikings are a quarterback away from competing every week and Josh Freeman should solve that problem. What this means for the Ponder project remains to be seen. He will not come in as the starter right away, but it is only a matter of time before he learns enough of the offense and gets to play. While there is no doubt that Freeman can be inconsistent, he deserves more respect than he has been given of late. In a league where Blaine Gabbert and Sam Bradford are starters, Freeman is not the worst choice.

In the 2009 NFL Draft, there were three quaterbacks drafted in the first round. These are the stats prior to the start of this 2013 season, from best to worst (by QB rating):

The first stat line is Matthew Stafford and he was given a big contract extension this summer. The last is Mark Sanchez, who has been benched for Geno Smith. The middle stat line is Josh Freeman. Freeman is 2 touchdowns, 1% completion and 9 interceptions off of Stafford. He actually had thrown for 156 more yards than Stafford.

In the last 25 years, these are the quarterbacks who have at least a 4:1 touchdown to interception ratio in a full season with at least 25 touchdowns.

Hall of Fame quarterback, Fred Tarkenton said this about Freeman in an interview with WDAE radio, “He just plays God awful. And that’s who you are, right?” He went on later to say, “Josh Freeman has proven to me that he can’t play.” Now that Freeman will be wearing the same colors that Tarkenton used to wear, lets see if he will prove him wrong.