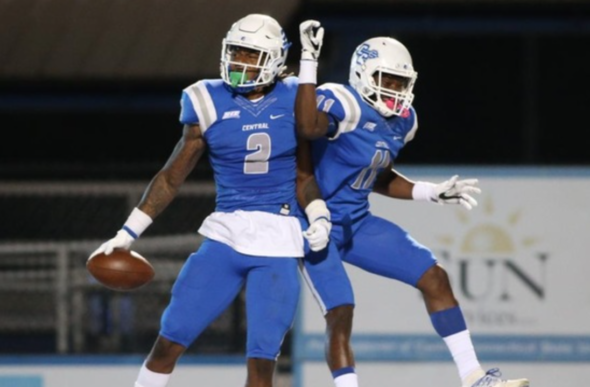 Tyshaun James is a special talent, with a big bodied frame. The CCSU Blue Devils wide out is a versatile prospect.

The 6-foot-3, 210 pound Wide Receiver has been described by his head coach Ryan McCarthy as a “matchup nightmare” according to an article posted by the CentralRecorder. Tyshaun James is a dynamic playmaker out of Middletown, CT and is entering his senior season with the Central Connecticut State University Blue Devils. The former Middletown High School Quarterback made the transition over to receiver during his freshman year and broke onto the scene in 2019.

James was an All-Northeast Conference First Team selection after leading the NEC in total touchdowns(14) last year. He capped off a superb junior season with 48 receptions for 978 yards and 9 touchdowns. James also ran for 167 yards on 24 rushing attempts and 5 touchdowns. The shifty playmaker can just about do it all for the Blue Devils, as he played a huge role in guiding the team to the FCS Playoffs and a perfect 7-0 conference record.

When you watch the tape on James you see just how explosive of a player he is for the Blue Devils. He jets by defenders with ease and bullies his way through linebackers when lined up in the backfield. James is a top-ranked FCS receiver heading into his senior season and I expect him to continue the dominance he possesed last season. What makes a guy like James so attractable to NFL teams is his ability to be used in a variety of ways. He can line up at receiver and go head-to-head with your best corner or even be used in a wildcat type package where is a huge threat to either run the ball or throw it down field.

Here is a video of Jame lining up in the backfield taking the snap out of the wildcat formation rushing it into the End Zone.

Tyshaun James with the TD and CCSU leads 14-0 with 5:00 left in the 2nd Q. #GoBlueDevils pic.twitter.com/FU4bxp9cX8

Tyshaun James is a special talent, with a big bodied frame. The CCSU Blue Devils wide out is a versatile prospect. He makes things happen when he has the ball in his hands.  The 6030, 210 pound wide out is the star of the Blue Devils offense. He runs across the middle, and can take a hit. He reminds me of Kendrick Bourne of the San Francisco 49ers.  Both have the same body frame and are explosive with the ball in their hands. – Damond Talbot, Owner, NFL Draft Diamonds.